The operation and maintainence of both treatment plants, the sanitary sewer and drinking water distribution systems for the Village of Garrettsville is performed by these personnel:

History of the Water Department 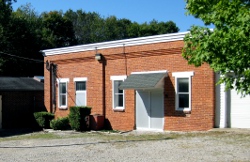 The Garrettsville Water Department was established in 1907, to alleviate Village safety concerns over inadequate fire protection. At the time, the Village Fire Department had only an unreliable, 20-year old, Village owned fire engine that utilized two river connections and five cisterns located throughout the Village.

In July 1905, the Garrettsville Council declared it necessary to issue municipal bonds, in the amount of $40,000, for the purpose of constructing a water works system. The original contract included an iron removal treatment plant with two sand filters, 46 fire hydrants, 40 main line valves and approximately 6.5 miles of water lines. Construction was completed and Village Bylaws were adopted in the spring of 1907. The original Bylaws supplied an estimated yearly water cost of $15 for a home. The cost included usage for one water closet, one bath tub, one cow and a horse and carriage. The first washbasin in every house was free of charge.

The first known improvements occurred in the 1940’s when a modern aerator was installed and the two original water filters were replaced. In 1958, the water facility was enlarged and two additional filters were added.

The water treatment plant obtains water from ground wells located near the facility . Twenty different wells have been utilized over the years. Today the plant uses two wells which were drilled and installed in 1968 and 1975.

In 1991, improvements were made to the facility to expand the treatment process. These improvements included the addition of chemical aeration, rebuilding the rapid sand filters with improved media and rebuilding the under-drain system. It also included the addition of a second clearwell and a new, high service pump, a connection to the Village sanitary sewer system, installation of a process control panel, updating the electrical system, and the installation of a bulk water station.

In 2000, the 350,000 gallon reservoir was refurbished and altitude valves were installed to improve the water turnover throughout the distribution system. The original 150,000 gallon clearwell was improved in 2004.

Today, the Garrettsville Water Department has over 200 fire hydrants, 220 water main line valves, over 20 miles of distribution piping. This allows the Village to supply an average of 90 million gallons of water each year to over 2,500 customers.

History of the Wastewater Treatment Plant 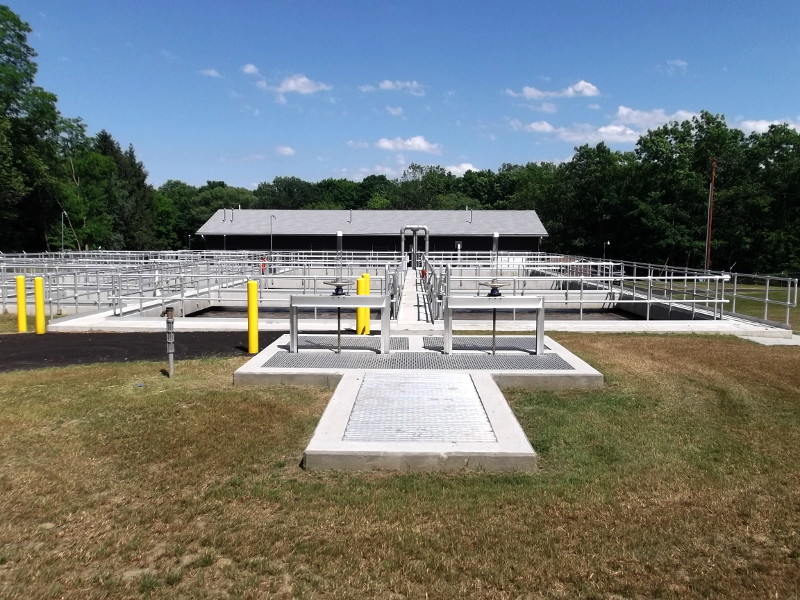 The original wastewater treatment plant in Garrettsville was constructed in 1960. The plant had a capacity of 0.150 million gallons per day (MGD) daily flow and consisted of screening, primary settling, a trickling filter, a secondary settling tank, an anaerobic digester, and three sludge drying beds. In 1964 a single grinding device was added to the influent. During the 1970’s, the anaerobic digester was converted to an aerobic unit, and chlorine disinfection was added to the effluent. In 1985, the plant was changed to an aeration/clarification system which featured in-tank clarification that had an average daily design flow of 0.285 MGD and a peak flow of 0.300 MGD. At that time, the trickling filter basin was converted to a flow equalization basin, the existing office became a blower building, and the current office and laboratory were constructed.

The 1990 improvements consisted of an influent structure, which housed two new grinding units, and split flows between the existing and newly installed extended aeration system. The facility treatment capacity was increased to 0.356 MGD daily flow and 0.585 MGD peak. Also added at the time was a new blower/generator building and a 320,000 gallon flow equalization basin.

In 1994, disinfection improvements were constructed. An ultraviolet disinfection channel was installed and the chlorination facilities abandoned. The chlorination tank was refurbished to become a plant effluent pumping station during wet weather and the sampling chamber was updated.

In 2007, along the wastewater access drive, a new 18″ interceptor replaced the original 15″ piping and the existing 2″ water service line was upgraded to a 4″ water main.

In 2009, planning was set in motion to construct an extended aeration plant expansion to increase facility capacity and sludge storage, as well as improve treatment effluent and replace failing treatment units. In 2010, detailed design documents were prepared and the project bid with construction beginning in December that same year. During this expansion, treatment design capacity was increased to 0.5 MGD daily flow and 1.2 MGD peak flows, a fine screen solids compaction unit replaced the solids grinding devices, and tertiary treatment through two disk filters was added prior to disinfection. Initiation of operation began in February 2012 and in its first four years of operation the facility has obtained removal efficiencies in excess of 99% for both the total suspended solids and the CBOD (pollutional strength).

Wastewater is collected for treatment within the Village of Garrettsville through approximately 15 miles of conventional, gravity sewers and five wastewater lift stations that transport wastewater to the Garrettsville Wastewater Facility for treatment. These lines are periodically scrutinized by video inspection and smoke testing in order to rehabilitate needed areas within the collection system to reduce unwanted rain inflow and infiltration, and to maintain operational integrity of the collection and treatment facilities.

The Village of Garrettsville Water Department is pleased to provide you with its twenty third annual water quality report. This publication is required of all water utilities to provide each customer with an overview of the quality of water served. This report...